This week I was successfully able to make my models produce good results. I was evaluating them on the wrong structure of data. Yes, yes the data format that I was working on since ages did not prove useful to me. But it was a building block to the generators that I finally created. After that, I re-evaluated my original model and viola! I got an AUC-ROC score of 0.81. As this generator model proved useful, I immediately parallelized my operations.

I was running a total of 6 notebooks. 2 on PLHI server, 2 locally, 1 Kaggle notebook and 1 Colab notebook.

The PLHI server did not have the complete data so I exported a subset over there and re-trained my pruning model.

My local system had the data but lacked processing power. So I ran model evaluations locally. Each Int-8 model took over 24 hours.

The Kaggle notebook had data and processing power but the data was not in the correct structure to be fed to models. So I tested inference scripts here.

Colab lacked the data but had processing power. It also had support for Tensorflow-model-optimization library. So I ran my model quantization scripts here by uploading a small subset of the data.

The main problem was that the data is 45GB in size. It took a lot of time to download or upload anywhere. Even for my local system, I had to clear a lot of my personal data to make space for this dataset.

Along with the notebooks that I was running, I was also testing my custom scripts locally. Finally, I finished these processes and pushed my code. I also submitted my model results.

While I was working on these tasks, I also setup my Raspberry Pi on Qemu and began working on it. There were 2 main blockers here - network and space. The emulator was not getting internet access initially. So I built a bridge interface from my host ethernet to the guest (RPi) ethernet. This took quite some time to troubleshoot and in the end I was able to provide internet access to my Pi. A few tweeks later, I was able to get it to connect to my Wifi connection.

The next blocker was the size of the image. After emulating, I was not left with enough space on my partition to install Tensorflow or other packages. So I had to resize the Raspbian image. This needed me to tinker with the partitions using fdisk and in the end, I was able to allocate space to the image.

Right now, I am trying to solve the MemoryError that I get everytime I  try to install Tensorflow on the Pi. I also get an error that says that grpcio is not supported. Hopefully this will get resolved soon because the scripts are ready to be run.

After this last task I can say that I have completed my project.

Popular posts from this blog

Low Powered Models for Disease Detection and Classification for Radiology Images
Project Description -The aim of this project is to create Deep Learning models for detection and classification of radiology images. The models must be compressed such that they can be deployed to low powered devices like ARM devices, Android devices, etc. Compression techniques such as Quantization and Pruning can be used.  Mentors -Priyanshu SinhaJudy GichoyaGeeta Priya Padmanabhan
Tech Stack - NumpyPandasPyDicom
TensorflowTensorflow-Lite/ Tensorflow-Model-OptimizationDockerQemu

Why to do this -There has been a lot of progress in developing Machine Learning models that predict the medical condition of a patient based upon specific inputs relevant to the diagnosis of that condition. However, these models have drawbacks while deployment in real-time on edge devices. Firstly, they have been trained on high-end GPUs that consume a lot of …
Read more 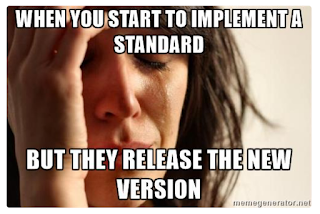 Introduction My name is Aishwarya Harpale and I am a Senior year Computer Engineering student from Pune Institute of Computer Technology, Pune. I was selected for GSoC 2020 to contribute to the Open Source Organization — LibreHealth. The project that I will be working on is “Low Powered Models for Disease Detection and Classification for Radiology Images”. I will explain a bit about my journey until now. Pre-GSoC Period After the organizations were announced, I began looking for projects that came under the category of Machine Learning. LibreHealth’s projects caught my eye and I felt that I could contribute to those projects using my knowledge. As students, we were asked to develop a Proof of Concept(PoC) so that the mentors could evaluate our coding skills. I developed an application for Classification and Localization of Chest-XRay images. This application had a front-end developed using Bootstrap and it was deployed on a Flask server. For further details regarding …
Read more

I fine-tuned my DenseNet201 and InceptionV3 models till I could maximize their accuracy. I used class-weighting for this purpose and achieved around 85% accuracy on both the models.For both the models, I calculated all the performance metrics like - AccuracyLossConfusion matrixPrecisionRecallF1 scoreROC curve

I will now document all these metrics to present them to my mentor.I implemented dynamic range and Float16 quantization methods on DenseNet201 and InceptionV3 and evaluated their accuracy. Float16 gave minimum change in accuracy while dynamic range dropped the accuracy considerably. Plans for the upcoming week

I tried implementing Int8 quantization and model pruning but ran into a heap of errors. So this week, I will rectify those errors and make these modules run.

Earlier when I had experimented with pruning I ran into a lot of OOM errors so my mentor has been gracious to provide me with a Jupyter Hub access hosted on the PLHI server. The best part about th…
Read more